You are not a cypherpunk, but that’s ok!

Privacy is mandatory for the Bitcoin network layer but should just be an option for user facing applications. If emails could only be sent encrypted, mass adoption of the internet would have never happened.

Bitcoin is a child of the cypherpunk movement.

We do not know who Satoshi Nakamoto, the inventor of Bitcoin, is but we have a good idea about the people who inspired Satoshi. Bitcoin is clearly a child of the cypherpunk movement, proven through the list of references mentioned in the Bitcoin white paper.

The cypherpunks formed as a group in the early 1990s in the San Francisco Bay area. Most of them had a strong libertarian or anarchist mindset, envisioning a future without states ruling and limiting individuals. Well, as there are no stateless places on the globe, cypherpunks are striving for so-called crypto anarchy, virtual anarchy created by using cryptographic tools. If you encrypt all your communication, hide your location by using the TOR network and use privacy protected crypto money. You can subvert the power of the state you are living in. Cryptography would put you out of reach of the state’s ability to tax and regulate you.

Most of us are not a cypherpunks

Although crypto anarchy might be a luring idea for everyone on the day of tax payment, in reality, the plot of most people’s lives has very little in common with the crypto-anarchist lifestyle. Instead of hiding in cryptographically ensured privacy, billions of people share most of their life on social media platforms. If people are asked to trade privacy off against usability and convenience, privacy seems to lose. This is being brought to evidence through the way we communicate (email, messenger), store our data (cloud) or pay our bills (credit card).

Most people seem to make less and less use of privacy protection, although privacy is crucial for our social and personal development. Everybody needs a space, where he can be alone, where he is sure not to be watched by anyone and where he will behave in a way as he would never behave if someone is watching. Glenn Greenwald describes the importance of privacy very good in his TED talk from 2014.

The possibility to protect someone’s privacy whenever it is wanted is one of the foundations of our freedom. It is crucial to have the possibility to encrypt emails and data or to pay something with anonymous cash, whenever we want to do it. Not because we are terrorist or criminals, but because we want no one to know about what we are doing or thinking.

What brings us freedom is the option to choose privacy protection at any time, without a need to argue for using it. Even if people use it very seldom, it is crucial to have this option.

To maintain the possibility to use it with sound privacy protection, improvements on the protocol layer are necessary but already planned. The fact that every Bitcoin transaction is stored forever in the blockchain combined with the increasing capabilities to analyze the blockchain data, have made transactions and users traceable. Upcoming improvements like the implementation of Schnorr signatures and the increasing use of the Lightning network help to keep up the possibility to use Bitcoin with full privacy.

If email could only be sent encrypted, the internet would not have become a mass technology

For user-facing applications like wallets, strong improvements regarding usability are necessary. Mass adoption will not be possible if we ask non-tech-savvy people to deal with cryptographic keys. Providing user interfaces that allow sending Bitcoins to user profiles, bound to mobile numbers or emails, will make handling of Bitcoin much easier, although they are compromising the anonymity. We must give the users an option to opt out of privacy for better convenience and usability. If writing an email would have only been possible by encrypting it with tools like PGP, email would have never become the first mass use case for the internet.

What if the Bitcoin community rejects trade off privacy as an option?

Cryptocurrencies are bringing a measurable efficiency gain by superseding payment intermediaries. Any new technology that allows us to do something more efficient than it could be done before will stay and become accepted. The cryptocurrency which will first provide a mass capable user experience will succeed. So rather we start building this user experience for Bitcoin, or corporate tokens from companies like Facebook or Telegram will do so.

If corporate coins should win the race for user acceptance, driven by usability, there will be no option to use its privacy protected. If these coins should establish as a general mean of payments, we will have irrevocably lost the possibility to do privacy protected payments and with that lost a big part of our freedom.

In that case, I would prefer 99 percent of all Bitcoin payments being fully transparent, but still having the option to use it privacy protected, if needed or wanted, without the need to argue for it.

This website uses cookies to improve your experience while you navigate through the website. Out of these, the cookies that are categorized as necessary are stored on your browser as they are essential for the working of basic functionalities of the website. We also use third-party cookies that help us analyze and understand how you use this website. These cookies will be stored in your browser only with your consent. You also have the option to opt-out of these cookies. But opting out of some of these cookies may affect your browsing experience.
Necessary Always Enabled

Any cookies that may not be particularly necessary for the website to function and is used specifically to collect user personal data via analytics, ads, other embedded contents are termed as non-necessary cookies. It is mandatory to procure user consent prior to running these cookies on your website. 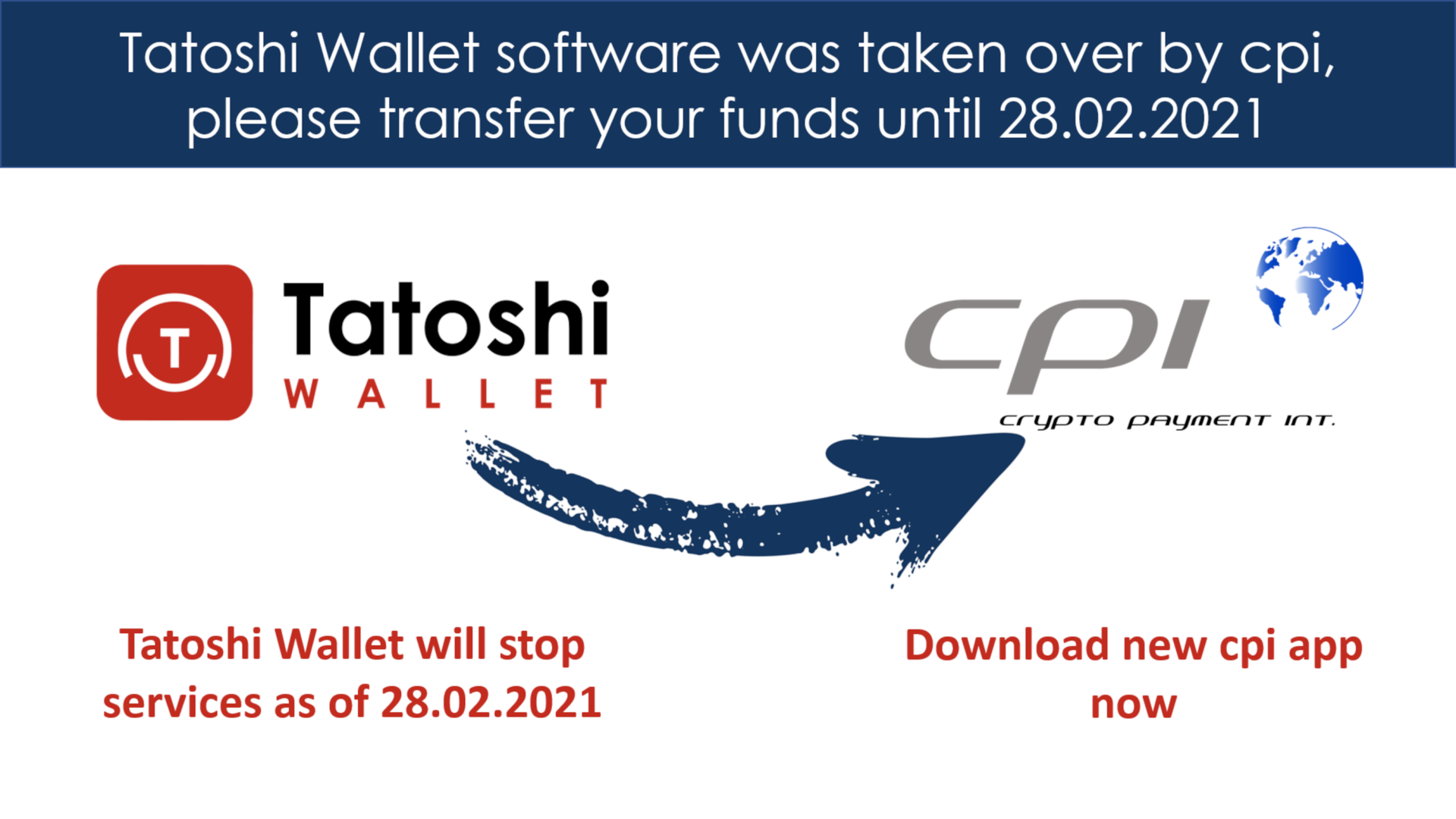 We are happy to announce that cpi Crypto Payments International GmbH, Berlin has taken over our Tatoshi Wallet software. Due to that, Tatoshi Wallet will close operations as of 28th February 2021. If you would like to continue to use our software, please install the cpi Wallet app and move your funds to the cpi app.

For more information, please click on the following link:

Which functionality does Tatohsi Wallet offer?
Why is Tatoshi Wallet secure?
How does the key recovery work?
What is a wallet?
How does setting up a protector work?